For this reason, now more than ever, water quality monitors, managers and industries such as aquaculture need reliable tools that can help them monitor, reduce, and manage the impacts of harmful algal blooms

Why would aquaculture monitor algal blooms?

Algae are essential for life on Earth and for fisheries. But when some species bloom, they can cause harm. Some 5,000 species of microalgae form the foundation of aquatic food chains, help control atmospheric CO2 levels, and produce roughly half of the world’s oxygen. The troublemakers are approximately 250 species that can produce potent toxins or cause harm through their sheer biomass; a particular problem in the aquaculture industry where the presence of algal blooms can cause all stock to be lost.

What is a harmful algal bloom?

Harmful algal blooms are overgrowths of algae in water. Some produce dangerous toxins in fresh or marine water, but even the nontoxic blooms hurt the environment and local economies. A harmful algal event is defined by UNESCO as “any event where humans, animals or other organisms are negatively affected by algae.” These include:

How do algal blooms hurt industry?

“aquaculture is particularly vulnerable, largely because of the nature of the business. Whilst wild marine fish can simply swim away from blooms, those held captive in intensive aquaculture operations cannot. They die.”

In fact, aquaculture is particularly vulnerable, largely because of the nature of the business. Whilst wild marine fish can simply swim away from blooms, those held captive in intensive aquaculture operations cannot. They die. Recorded losses include US $71 million in Japan in 1972, US$70 million in Korea in 1995, US$290 million in China in 2012, and US$100 million in Norway in 2019. A 2016 Chilean salmon mortality event caused a record US$800 million loss, causing major social unrest. 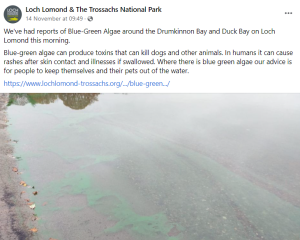 However, the effects of algal blooms do not end there. After being consumed by small fish and shellfish, toxins move up the food chain and can impact larger wildlife such as birds and otters or, as is the case with inland ponds, streams and rivers, impact water quality for swimming and people’s pets such as dogs that might drink from the water. An example of this was shared out by the Loch Lomond & The Trossachs National Park recently, a warning for local dog owners to make sure that their dog didn’t drink from the water.

In 2019, an algal bloom was believed to have killed thousands of Atlantic salmon at a finfish aquaculture site in Scotland, and in the same year aquaculture operators off the coast of Norway experienced mass mortalities of salmon due to a prolonged algal bloom. In 2020, a young oyster farmer died on the shores of Brittany, France after inhaling the toxic gas produced from a large algal bloom, and there are now databases devoted to monitoring algal blooms globally – http://haedat.iode.org/, regionally – https://hab.nersc.no/ and even at a state level – https://calhabmap.org/

Eventually, harmful algal blooms cause dead zones – areas in water with little or no oxygen – in which aquatic life cannot survive. Also known as hypoxia, these areas are caused by the algal blooms consuming the oxygen as they die and decompose. Aquatic animals, especially juvenile fish and seafloor dwellers such as crabs and clams, will then leave the affected area to survive. This is a particular problem in waters around the USA, where more than 166 dead zones have been documented, affecting waterbodies such as Chesapeake Bay and the Gulf of Mexico. 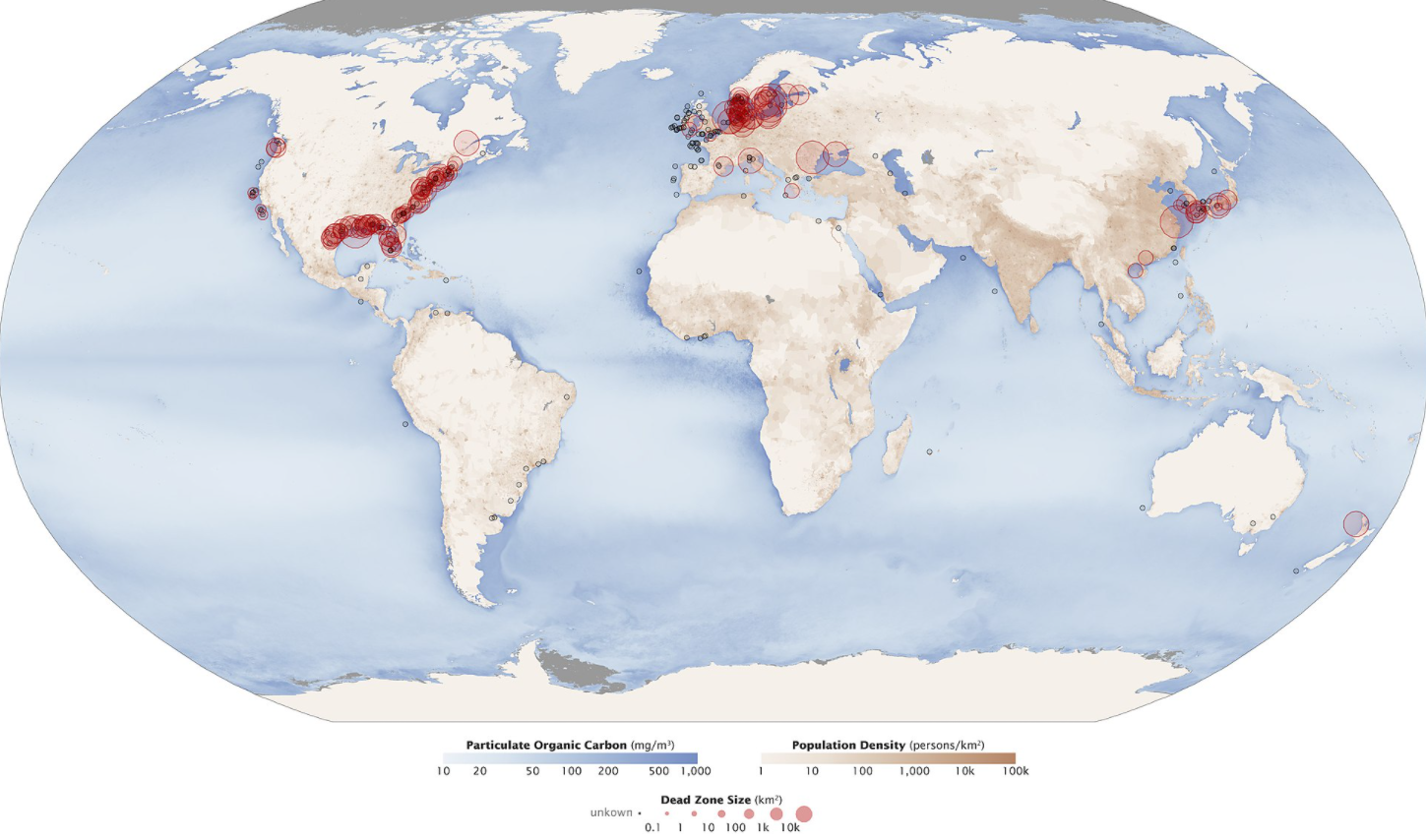 The Gulf of Mexico dead zone is the largest in the United States, measured to be 5,840 square miles in 2013… the size of Jersey. This particular dead zone is caused by farming actinity runoff into the Mississippi River, especially nitrogen and phosphorous. Nitrogen and phosphorous enter the river through upstream runoff of fertilizers, soil erosion, animal wastes, and sewage. In a natural system, these two nutrients are not significant factors in algae growth because they are depleted in the soil by plants. However, human activity causes levels of these over and beyond what plants can cope with: consequently algae growth is no longer limited and algal blooms develop.

Harmful algal blooms: the scale of the problem

Since then, the marine economy has grown, tourism has developed and updated estimates of harmful algal blooms and hypoxia costs on the restaurant, tourism, and seafood industries are now estimated as US$82 million annually. A more recent US study focusing on health impacts estimated the cost-of-illness caused by both marine pathogens and toxins to be US$900 million each year.

What can be done about harmful algal blooms? 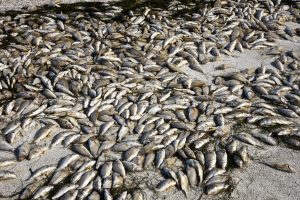 The key to minimizing dead zones is to address them at their source. Current solutions include:

These solutions take federal or national legislation and programmes to implement and would significantly reduce the input of nitrogen and phosphorus to vulnerable waterbodies. This approach has been used successfully in the Great Lakes’ recovery from eutrophication. But all such solutions start with monitoring the algae, using algae detection instrumentation such as those developed by Chelsea Technologies.

Currently, depending on the location and regulatory body, water samples are only required every 1-2 weeks to assess levels of toxic algae in the water but for the aquaculture industry this is not enough. Other initiatives are also in place, such as remote sensing using satellite data to give an early warning of the onset of an algal bloom. Early warning of algal blooms are crucial to farm operators as it allows them to employ management practices to minimise the effect of algal blooms. For example, if a bloom is suspected, operators can increase the aeration in the farm to help avoid suffocation or can cease feeding to allow the fish to ‘settle’ further down in the water column and minimise contact with the algae at the surface.

Although these initiatives help in the early detection of algal blooms and the identification of toxic species, they have limitations. The daily variation in algal populations is poorly understood from weekly sampling and algal blooms can be missed through this routine. Additionally, satellite measurements rely on clear skies and measurements can be intermittent. Continuous, in situ algal monitoring is crucial to understanding diurnal, seasonal and environmental variability at culture sites. Sensors can be placed in strategic areas to continuously monitor for any incoming blooms, allowing operators to employ management practices to minimise the risk to their livestock.

“The compact design and low cost of the TriLux algae sensor makes it ideal for mass deployments, and low power consumption coupled with a wide choice of data outputs and anti-biofouling options allows for long-term remote deployments”

How can Chelsea Technologies help with harmful algal blooms?

With the apparent increase in algal bloom incidence and severity, possibly due to rising water temperatures and increased anthropogenic inputs, the need for improved forecasting and mitigation of algal blooms is more relevant than ever. Chelsea Technologies’ multi-parameter algal fluorometers, such as the Chelsea TriLux with parameters including chlorophyll-a, phycocerythrin, phycocyanin and turbidity are able to detect rises in algal pigments.

The compact design and low cost of the TriLux algae sensor makes it ideal for mass deployments, and low power consumption coupled with a wide choice of data outputs and anti-biofouling options allows for long-term remote deployments. Integration to realtime systems for management of assets with alarms means instant readings, no need to take samples back to lab – immediate problem identification as they occur in realtime, saving stock and assets. Chelsea Technologies currently have a special bundle offer including a TriLux algae sensor offer, which includes a free solid calibration kit: