The rise and rise of global shipping due to the Pandemic-fueled global trend towards internet shopping means maritime ports are now handling evermore traffic, congestion is growing and pollution is on the increase.

Chelsea Technologies' range of instrumentation is here to help protect the marine environment in our changing world.

Why is global shipping rising?

With so many stores closed during the Pandemic, consumers globally had no option but to turn to the internet to buy the products they need. The pandemic sharply accelerated the shift towards a more digital world and triggered global changes in online shopping behaviours that are likely to last well beyond 2021. A key thing to note is that this acceleration towards online shopping is a global phenomenon: in developed economies, online shopping was already popular, but some of the largest increases were in China and India, with consumers in emerging economies making the greatest shift to online shopping, as reported by the United Nations Conference on Trade and Development. 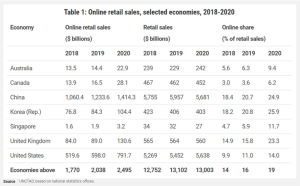 The ecommerce contrast and the ramifications between 2018 and 2021 couldn’t be clearer. In 2018, there was a global oversupply of shipping, and large vessels used “slow steaming” to reach their destination. Slow steaming is when vessels restrict their speed to 10 knots (normal is up to 20 or so knots, with tankers and bulk carriers typically at 15 knots), to maximise fuel economy at a time when the excess supply of vessels led to a bust in typical container revenue, commanding US$2,000 per container at the time. Container operators even took the bulbs from their vessels away to increase their fuel efficiency at slow speeds to cope with slow steaming.

Such has been the shift towards online commerce during the Pandemic and the container deliveries required to deliver these goods, that by 2021, a typical container revenue now commands a staggering US$15,000 – US$20,000. With up to 100,000 iPhones per container, and with 16,000-24,000 containers per vessel, the blue economy has gone from bust to boom, and vessel operators are steaming ahead to make the most out of the situation, making hay whilst the sun shines: forget slow steaming. This sensational shift towards digital isn’t about to disappear, and some container operators probably regret their lack of bulbs now, as container prices are set to continue rising in 2021 and beyond.

A quick look at the global shipping map in late 2021 only confirms just how active the blue economy has now become, with clear congestion around some of the busiest maritime ports in the world including Los Angeles, as the image shows below. With the peak shipping period now in full swing at the time of writing as the holiday shopping season approaches, Los Angeles ports now set new records almost daily. The traffic has been rising and created a backlog at both of her ports, overwhelming the workforce, some of whom were themselves recovering from Covid. LA’s ports break monthly cargo records regularly; the Long Beach port is on pace to process more than 9 million container units this year, exceeding last year’s record of 8.1 million units, the most in the port’s 110-year history. Meanwhile, the Los Angeles port in June became the first western hemisphere port to process 10 million container units during any 12-month period. 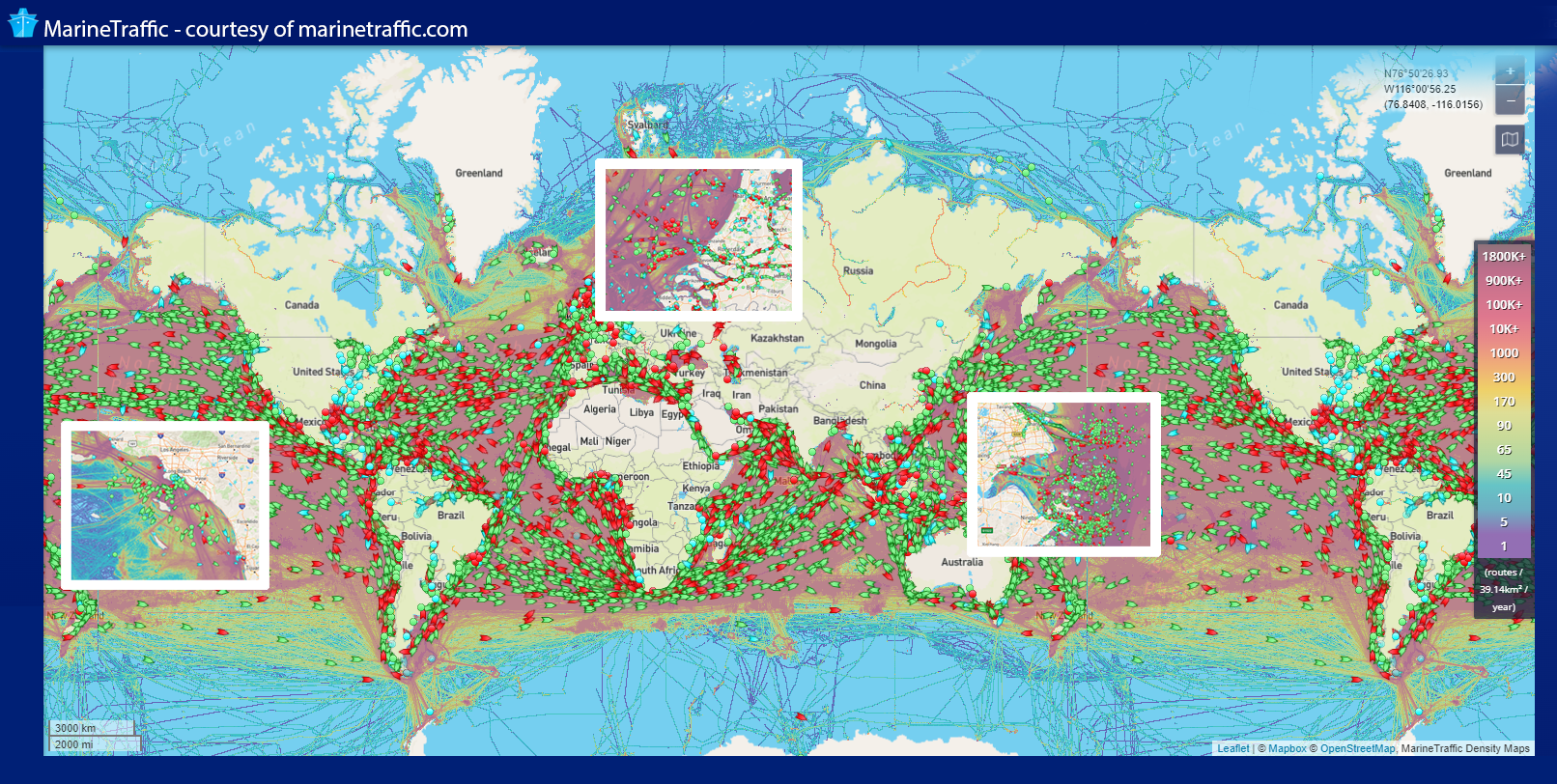 Dozens of behemoth cargo ships adorned with tall stacks of brightly colored containers now dot the coastline off southern California. Part of a shipping bottleneck plaguing ports globally, the ships – their diesel-fueled engines always ablaze – pump out pollutants as they idle, anchored off-shore. The clogged supply chain has been described as an economic calamity, as the delayed cargo caused shortages in common goods and drove consumer prices ever higher. But environmentalists and public health advocates are concerned it is also furthering the climate catastrophe. The container ships awaiting entry are compounding the levels of contaminants that have long come from the ports and that impact the local environment, coastal communities and adversely affect the ambitious carbon targets needed to curb the worst effects of climate change. With the holiday shopping frenzy just around the corner, there are now concerns the problem may get worse before it gets better, a trend set to accelerate well into the foreseeable future. 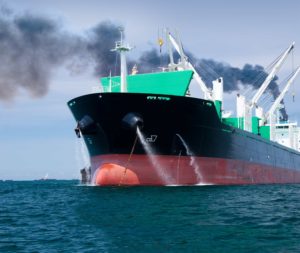 An essential part of the economy, the blue economy brings in 40% of goods shipped to the USA and ships out 30% of its exports. In fact, the blue economy accounts for 90%+ of all goods transported globally. The downstream inland freight transportation system, which includes the trucks, trains and planes that help distribute goods brought over on ships, also generates $9bn in tax revenues for the state and is responsible for a full third of the state’s economy. But it comes at a high cost, and like the UK, in the USA the freight system is itself also short of the drivers needed to operate the transports, linked to a California Truck Ban which says all trucks must be 2011 or newer and a law called AB 5, the combination of which further exacerbates congestion at the ports. The system is also responsible for nearly half of California’s air pollution. The Ports of Long Beach and Los Angeles, two of the USA’s busiest, create more than 100 tons a day of smog and other cancer-causing contaminants that choke local communities – rivaling roughly 6 million cars on the roads across the region each day. And that was even before the current backlog and buildup.

“in the USA the freight system is itself also short of the drivers needed to operate the transports, linked to a California Truck Ban which says all trucks must be 2011 or newer and a law called AB 5, the combination of which further exacerbates congestion at the ports”

In previous years, ships could enter the port and receive a berth immediately, but for more than a year now, the ports have been packed, leaving between 40 and 60 ships at anchor awaiting entry, belching away. In September, the number rose up to the 70s. In June, the Port of Los Angeles announced that it processed more than 10 million container units over the previous 12-month period, the first port in the western hemisphere to do so. In May alone, the port brought in more than 1 million containers – the most ever seen in its 114-year history. And more are on their way.

While the ships are anchored offshore, they use their auxiliary engines, running on diesel fuel, to power essential on-board functions, including refrigeration, lighting and instrumentation. This has “substantial implications for portside communities from increased particulate matter (PM) emissions, as well as contributions to smog-forming oxides of nitrogen (NOx)”, according to the California Air Resources Board, which released a report on the problem in June. The new Pandemic lifestyle maybe one where consumers can click away and place an order, but behind this convenience are complex supply systems. The Biden administration has now developed plans with the Port of Los Angeles to begin operating 24/7 to process the ships faster to help ease congestion in the backlogged supply chain.

While this may ease congestion on the coast, it won’t have as much of an effect on limiting emissions, and if anything, it is going to take the bubble from the port and move it inland. From the pollution standpoint it may make things worse. Roughly 40% of the cargo coming into the ports doesn’t land locally. It is loaded on to diesel trucks that drive it to diesel trains to be slepped off to destinations across the country. Communities nearest the port and along the truck routes that serve the port are mostly low-income communities; they take the brunt of the pollution burden while the rest benefit from cheap flat-screen TVs from China or Korea. Frontline communities near ports are now fighting for cleaner air: nearby neighborhoods in Wilmington, San Pedro and West Long Beach have elevated rates of asthma and are the area’s highest risks of cancer, whilst the poor air quality in some LA county communities also increased fatalities from Covid, with deaths up to 60% higher than areas with better air, according to a study from UCLA. Meanwhile, southern California saw one of the smoggiest years in decades in 2020, according to reporting in the Los Angeles Times.

“Communities nearest the port and along the truck routes that serve the port are mostly low-income communities; they take the brunt of the pollution burden while the rest benefit from cheap flat-screen TVs from China or Korea”

Such is the local feeling against these contamination-belching behemoths anchored outside Los Angeles, that Los Angeles City Council Member Nithya Raman introduced a resolution 5 October calling on top importers with ships coming into the San Pedro Port Complex to commit to using zero-emissions ships by 2030. Representative Michelle Steel, who referred to the anchored ships as “an environmental and public health crisis”, also introduced a bill to ban cargo ships from anchoring off the coast near her district. As part of a Ship It Zero campaign, organizations are applying pressure on major retail companies such as Amazon, Target and Walmart to commit to using 100% clean energy shipping by 2030; advocates expect the first non-fossil-fueled ships to set sail in the next three to four years. The problem here? Ships typically have a three-decade lifespan, so those being built today could still be in use by 2050.

To reduce this pollution the IMO has established new regulations through its Marine Environment Protection Committee (MEPC). Ships operating both globally and in Emission Control Areas must now reduce NOX, SOX and particulate emissions. With the global sulphur limit dropping to 0.5% in 2020, the shipping industry must implement strategies to meet this target. To meet this requirement, Chelsea Technologies developed the Sea Sentry, a fully integrated turnkey solution to monitor exhaust gas wash water from scrubber systems and meet IMO regulations.

Another relevant instrument in the Chelsea Technologies range for ocean shipping is the FastBallast, which allows for rapid on-board testing of treated ballast water to ensure compliance with the IMO D-2 & USCG Discharge Standards.

An environmental problem of increased shipping is that as vessels sail the seas, invasive species carried in their ballast water cause devastation to marine habitats worldwide. Ballast water may be taken onboard by ships for stability and can contain thousands of aquatic or marine microbes, plants and animals, which are then carried across the globe. Untreated ballast water released at the ship’s destination could potentially introduce a new invasive marine species.  Hundreds of such invasions have already taken place, sometimes with devastating consequences for the local ecosystem.

In 2004 the International Marine Organisation (IMO) introduced the Ballast Water Management Convention to prevent the spread of harmful organisms through ballast water. All ships must now meet the IMO D-2 Performance Standard which states that discharged ballast water must not contain more than 10 viable cells/mL in the 10-50 μm size range (smallest dimension). 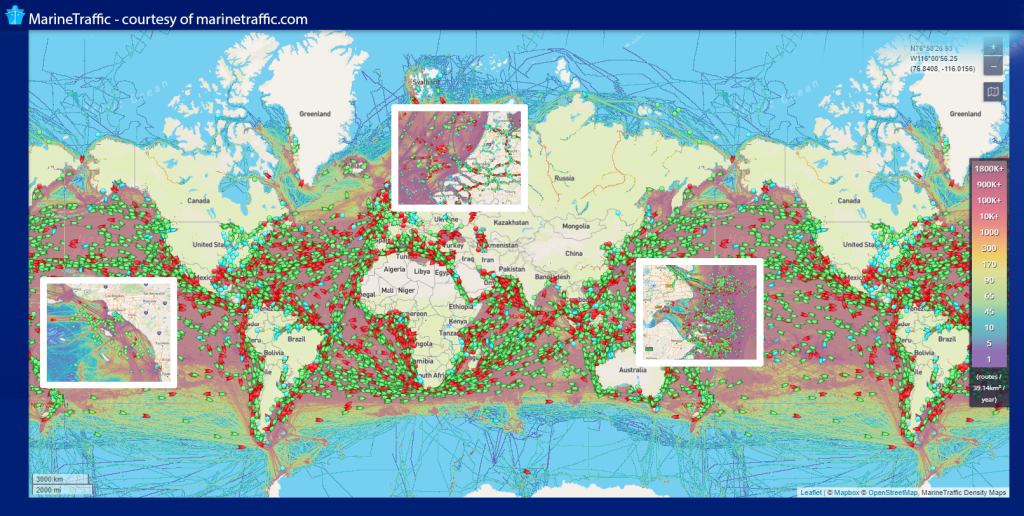