The compact and highly sensitive fluorometers have excellent turbidity rejection and high ambient light rejection, making them suitable for use in water and wastewater treatment works, as well as natural waters at the surface and to depths of up to 1000 m.

The compact and highly sensitive fluorometers have excellent turbidity rejection and high ambient light rejection, making them suitable for use in water and wastewater treatment works, as well as natural waters at the surface and to depths of up to 1000 m. 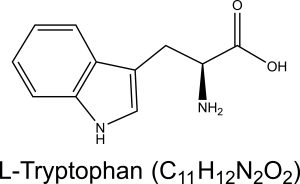 Laboratory studies have clearly identified that TLF is produced by all bacteria tested, both laboratory and environmental freshwater derived; tryptophan is an essential amino acid produced by all living things. While this work has demonstrated very strong significant correlations between single species enumeration and TLF intensity, the omnipresence of TLF prevents it from being applied as a species-specific enumerator, for example as an E. coli counter. This is particularly problematic in complex surface waters where the microbial communities are diverse and complex, further complicated by optical interferences such as absorbance and turbidity.

Recently, the scientific literature has been moving away from the comparison of TLF to current water quality monitoring parameters and has focussed on exploring the benefit of this phenomenon as an informative parameter in its own right. This has been aided by the understanding that correction for optical inferences, such as turbidity and absorbance, can improve the robustness of the data generated. Informed by the scientific research, Tryptophan fluorometry sensors have been developed by Chelsea Technologies, reporting semi-quantitative corrected data. This allows for the comparison of different water bodies and sensors, enhancing the usefulness and robusticity of the data obtained.

Through multiple case studies, detailed below, we are able to demonstrate that in situ Tryptophan-like fluorescence monitoring, using the Chelsea Technologies’ Tryptophan sensors, can:

The case studies below, combined with recent and ongoing research, further develop the understanding of what TLF monitoring can provide, and how this can enhance current water quality practices with the aim of improving the health of freshwater systems.

Chelsea Technologies’ Tryptophan sensors were deployed in urban Kolkata in both the pre- and post-monsoon seasons of 2019; Kolkata has a population of 4.8 million within the city limits and 14.8 million in the wider metropolitan area.

The principal aims of these deployments were to assess the ability of Chelsea Technologies’ Tryptophan sensors to identify the presence of biological contamination within these water systems. The Kolkata field sampling locations can be classified into three sample types based on location/water course type: the Hooghly River (Ganges); East Kolkata Wetlands; and open sewage canals. Excitation-emission matrices (EEMs) for the 3 water types are shown below:

The tryptophan sensor data demonstrates the ability of Chelsea Technologies’ sensors to identify waters with a high bacterial load and biological contamination events through the use of TLF. Moderate and weak positive correlations are seen between TLF and E. coli and total coliform (TC) cultures, R2 = 0.55 (p < 0.01) and R2 = 0.38 (p < 0.05) respectively. However, a strong significant correlation is identified between TLF and the total bacterial cell counts (R2 = 0.75, p < 0.01). This demonstrates the ability of TLF, and therefore Chelsea Technologies’ Tryptophan sensors, to provide information regarding the activity and fast-acting dynamics of freshwater bacterial communities, in response to pollution events; TLF should not be used as a species-specific enumerator in complex surface water matrices.

In addition, the capability of Chelsea Technologies’ sensors to monitor chlorophyll-α alongside fluorescence peaks T and C fluorescence allows for a better understanding of the microbial dynamics within a freshwater system. This is demonstrated by the data obtained from the East Kolkata Wetlands where the waters are highly eutrophic and have a high algal loading, identified by a notable increase in the chlorophyll-α fluorescence detected.

A river transect was conducted which comprised of 6 sampling locations on the river between Bagbazar Ghat and Eden Gardens. The fifth location of the transect (GT5) was from a sewage inlet into the river, approximately 100 m from a designated bathing site (Tara Ma Mandir). The Ganges Transect (GT) data provided a platform to assess the application of the Chelsea Technologies’ Tryptophan sensors for monitoring pollution events in freshwater systems. The GT data validates the application of the Chelsea Technologies’ *LUX range of Tryptophan sensors by successfully detecting sewage contamination from the complex background Ganges water matrix.

While some standard water quality parameters (pH, temperature, turbidity and chlorophyll-α) remain in-line with the other Ganges samples, at GT5 TLF spikes at the location of sewage input. This correlates with a spike in E. coli and TC enumeration, as well as in total bacterial cell counts. Due to the volume of water and mixing within the Ganges, these sewage signals are ‘lost’ soon after the initial input, with little downstream contamination legacy evident. However, there is potential for the use of a thresholding system for alarming for sewage pollution events and opportunities to exploit smaller, less complex freshwater systems for Chelsea Technologies’ Tryptophan sensor deployment. 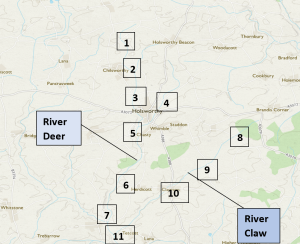 The Tamar catchment area is about 1,800 km2 in size and is predominantly rural. Further south are the Tamar estuary and the city of Plymouth, where the majority of the population is based. There are 19 river water bodies and 2 lakes in this catchment. Land-use surrounding the catchment is predominantly agricultural.

In 2013, assessment of the water quality of all the 21 water bodies in this catchment area was undertaken (cycle 2). This assessment revealed that 16 water bodies were deemed as being either “moderate” or “poor” in quality whilst only 5 water bodies achieved “good” ecological status. The main pressures in this catchment arise from agricultural runoff, treated wastewater, and combined sewer overflows (CSOs) which discharge untreated sewage during heavy rainfall events.

The aim of this study was to undertake a spatially-resolved field campaign in a catchment which is heavily impacted by agriculture and nutrient pollution, in order to assess Tryptophan sensor deployments in these environments.

In situ measurements were taken at the field sites of the following parameters;

Samples were also taken from the field in sterile centrifuge tubes and transported to the laboratory (whilst chilled in transit) for the following analysis; 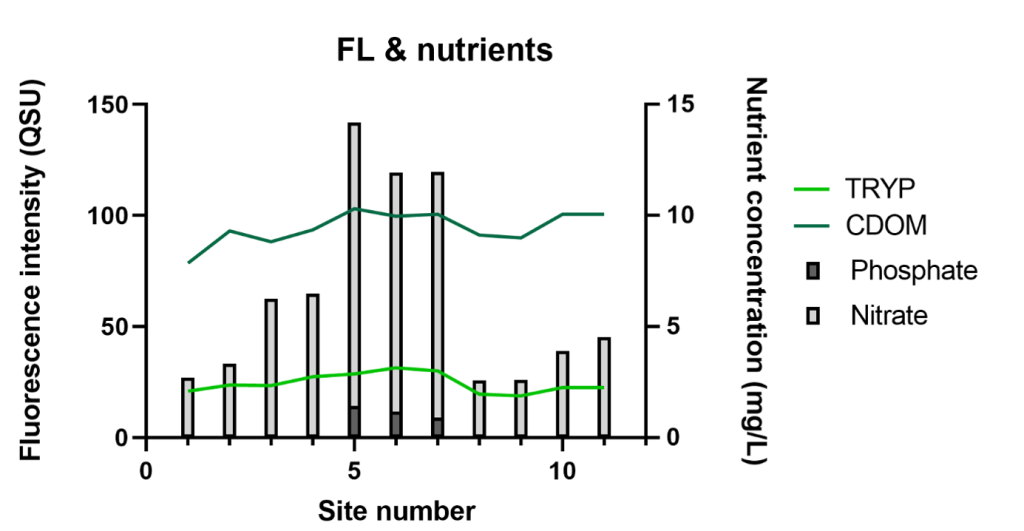 Sites impacted by high levels of nutrient pollution (notably sites 5-7) experienced concentrations of nitrate between 10-15 mg L-1 and phosphate between 0.9-1.5 mg L-1, and also presented the highest fluorescence intensity for both TLF and CDOM.

In addition, the ratio of TLF to CDOM was found to change through field sites, with a higher TLF signal relative to CDOM signal observed in sites where both nitrate and phosphate concentrations were higher (notably sites 5-7). This relationship was also found to be significant (p < 0.05). The correlation between the TLF:CDOM ratio with nutrient concentrations was found to have an R2 value of 0.76 for nitrate and 0.66 for phosphate.

In summary, the use of Chelsea fluorometers within catchments that are heavily impacted by nutrients and agricultural pollution points towards the use of both CDOM and TLF as markers for polluted waterways from a spatial perspective. The addition of a temporal dimension to this study would allow the observation of fluorescence changes over time and could provide information as to the response of individual systems to pollution events.

Two catchments were investigated in Abisko National Park, North West Sweden, Abiskojakka and Mjellajokka. The Abiskojakka catchment is approximately 600 km2 in size and is comprised of headwater that drain Meyers, tundra, mountainous and glaciated regions, moors and heathland, eventually forming large water bodies with wide rivers and streams. The Mjellajokka catchment (sites 11-13) is considerably smaller at 52 km2 and is comprised mainly of headwaters draining tundra regions down to dense broad-leaved forests (predominantly birch).

These catchments provide examples of headwater streams, with stream sections both above and below the treeline, originating from the main Arctic sub-regions. This study provided the opportunity to deploy Chelsea Tryptophan sensors and characterise the aquatic fluorescent organic matter (AFOM) characteristics in a range of unimpacted environments. The aim of this study was to test the performance of the sensors in a range of oligotrophic sites exhibiting low fluorescence and dissolved organic carbon (DOC) with little to no human-related perturbations at a local level.

In situ measurements were taken at the field sites of the following parameters;

Samples were also taken from the field in sterile centrifuge tubes and transported to the laboratory (whilst chilled in transit) for the following analysis;

All sites from both Abisko catchments exhibited very low fluorescence intensities for both TLF (< 10 QSU) and CDOM (< 20 QSU). However, even in sites which comprise glacial meltwater, some fluorescence was seen with the Chelsea Technologies sensor. TLF was fairly uniform throughout all sites, remaining between 7-9 QSU despite the changes in DOC and nutrient concentrations. Where DOC concentrations were higher in the Mjellajokka catchment (sites 11-13), elevated CDOM fluorescence intensity was also seen. The Mjellajokka catchment drains arctic meyer peat bogs and is likely to have much higher concentration of humic and fulvic acids, hence the observed CDOM fluorescence intensity of 14-22 QSU when compared to glacial melt sites (CDOM = 0.5-10 QSU).

In summary, this data shows that the *Lux range of fluorometer sensors can be used in a range of environments for investigating the fluorescence properties of natural waters. This applies to both environments which are heavily impacted by nutrients and pollution, and those which are oligotrophic and low-nutrient in nature with little to no impacts from human-induced pollution. The relationship between fluorescence and other water quality parameters of interest is seen to be system-specific, with CDOM and TLF displaying differential correlations with both nutrients and bacterial cell numbers dependant on the conditions of the system.

A long-term deployment of Chelsea Technologies sensors is ongoing at the Taplow monitoring station, located on the Jubilee River in the Thames catchment. The aims of this deployment are to:

This catchment study aims to provide further information regarding the application of the Chelsea sensors and the benefits of having this data at a higher spatiotemporal resolution to aid catchment monitoring and water quality management.

The sensitivity and calibrated range of each UViLux Tryptophan sensor has been standardised by cross-correlating each calibration solution against a certified reference standard of quinine sulphate using a bench-top spectrofluorometer.  Fluorescence is reported in Quinine Sulphate Units (QSU), where 1 QSU is equivalent to the fluorescence intensity recorded from 1 ppb quinine sulphate at an excitation wavelength of 347.5 nm and an emission wavelength of 450 nm. Factors are provided for selected compounds to convert the fluorescence output from QSU to ppb of the compound of interest

The hawk datalogger is a rugged, hand-held display with data logger for UniLux, TriLux and...

How Can Tryptophan-like Fluorescence Be Applied For Monitoring Water Quality And What Can It Do For You?
02.12.2021