With three different parameter combinations and depth ratings to 2000m, TriLux is suitable for a wide variety of water environments:

TriLux is compact and easy to integrate in wider systems and platforms including CTDs, data buoys, monitoring stations, AUVs and gliders. 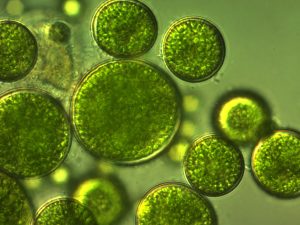 Algae are plant-like organisms that come in a variety of shapes and sizes – ranging from microscopic to large seaweed that may be over 100 feet long. Algae are found all over the planet, and can live in sea water, fresh water, and brackish water (a combination of fresh and sea water). Algae are vitally important building blocks of the food chain and ecosystem.

Algal blooms occur when there are overgrowths of algae, including green, brown, or red microalgae, or cyanobacteria that are commonly referred to as blue-green algae.

Not all algal blooms are harmful; however, when there is fast growth of algae and cyanobacteria that can harm people, animals and the environment, they are referred to as harmful algal blooms (HABs). HABs can produce toxins that are harmful to people and animals. The algae and cyanobacteria also reduce the levels of oxygen in the water when they decompose, and these lower oxygen levels may kill other plants and animals in the water.

Can algae make you sick? 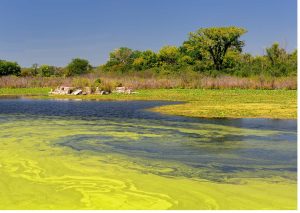 If people and animals are exposed to the toxins produced by HABs through water, food, or air they may experience symptoms that can range from mild to severe. These symptoms may affect the skin, stomach and intestines, lungs, and nervous system.

You may be exposed to HABs while enjoying outdoor recreational activities, while working near a body of water with a HAB, or from drinking water or food that has been contaminated. There is evidence that HABs are occurring more often, and that they are becoming more severe due to climate change, farming practices, and storm and wastewater runoff.  It is important to identify when and where HABs occur in order to protect water and food supplies, and to let people know when there may be a problem in their community.

What is blue green algae?

When the weather gets warmer, blue green algae can appear on British canals, rivers and reservoirs. This can be harmful to both people and animals. If you spend time near water, it’s important to understand some basic facts to keep yourself, your family and your pets safe.

Blue green algae (BGA) is not actually algae, but it looks like it. In fact it’s many tiny bacteria that can’t be seen with the naked eye. When the bacteria group together, they form large clumps, which look very much like floating algae. BGA can take many forms. It’s most recognisable as a shimmering blue-green layer on the surface of the water. At its peak, it can create a much more obvious scum. It can also appear as green streaks on the surface and as tiny green specks within the water. Sometimes it makes the water look a different colour. It usually occurs in still waters where there isn’t much flow, such as reservoirs and quieter canals. You might also see it when there hasn’t been any rain for a while.

The hawk datalogger is a rugged, hand-held display with data logger for UniLux, TriLux and...

The Importance of Biological Monitoring in Aquaculture
16.09.2019